Getting Smart About Tax Policy: Reflections from the NASEM Conference on Financing Population Health

This is the fourth and final installment of our series investigating if tax credits could be a source of sustainable financing for population health.

In December, the ReThink Health tax policy research team traveled to Oakland, CA to present our work on tax credits to the National Academy of Sciences, Engineering, and Medicine’s (NASEM) Population Health Roundtable workshop titled Exploring Tax Policy to Advance Population Health, Health Equity, and Economic Prosperity. We had spent the previous seven months exploring how tax credits can be used to spur investments in population health. Over this period, our team took a deep dive into the topic by examining the variety of tax credits in all 50 states and then sorting them into a rational typology before finally settling on the types of credit that would be most useful for population health purposes—the ones we’ve been sharing these past weeks on the blog. We believe that sharing the results of our work could help demystify this topic and potentially shift big, meaningful resources in new, critical directions.

I had the privilege of serving on the NASEM workshop planning committee with a diverse group of tax policy professionals and roundtable members. One goal for the workshop was to explain how tax policy could channel resources and shape incentives to advance population health. Another goal was to equip our participants with enough confidence to inspire a new dialogue between population health advocates and state and local fiscal authorities. We were impressed by the turnout and the variety of participants—from population health policy officials and academics to community activists. All were, no doubt, inspired by the timeliness of the topic given in the national debate about tax reform.

The planning team faced a fairly big challenge: equipping participants with the basic language and skills to navigate a very complicated policy domain. No one (apart from our presenters) considered themselves more than beginners on the subject of tax policy, according to our early polling of the room. The planning team offered a basic road map or cheat sheet (see graphic below) for participants to reference when they were confused about the kinds of taxes or tax incentives we were discussing. We also asked each presenter to focus on the crucial elements of tax policy design—we wanted participants to learn how to evaluate what works and what doesn’t when thinking about tax policy and population health in their own contexts. After providing a basic primer on taxes and the condition of state budgets, our presenters offered specific examples and opportunities for shaping incentives and creating a pipeline for financing population health in their regions. The workshop agenda and roster of our excellent presenters, including our very own Stacy Becker, Amanda McIntosh, and Nina Burke, can be found here. 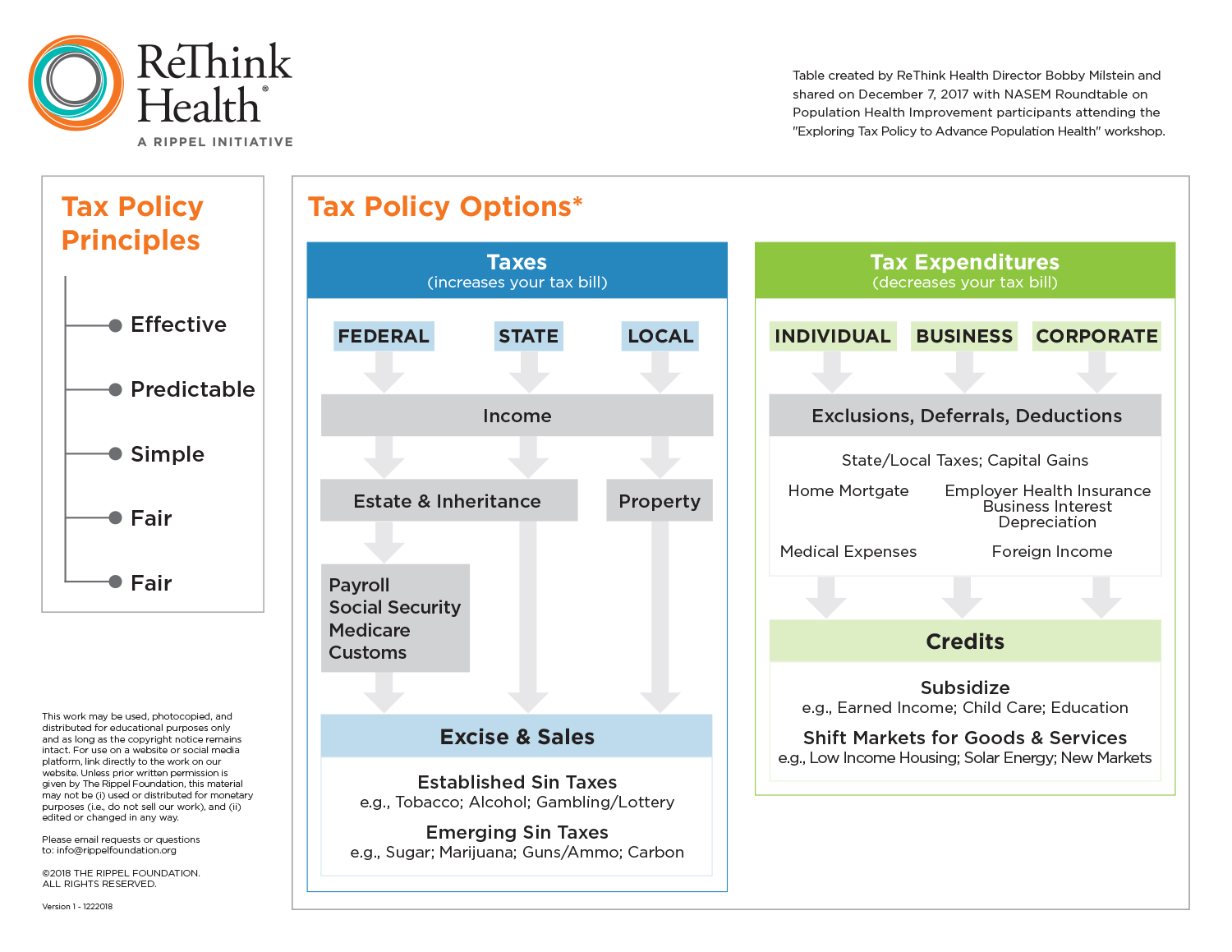 After the presentations, we asked participants to work in small groups to design a tax policy to raise money for a local wellness fund, which is a catchment for funds invested in population health interventions, in a fictional state we named “Ourlandia.” For me, this was the highlight of the day. We saw these “beginners” use key design principles to create a wide variety of consumption and production taxes on things like cigarettes, morphine production, guns, bullets, and even the use of tanning beds! But they didn’t just create taxes. We also observed them considering how to stimulate a donor market through charitable tax credits. It became clear to me that by demystifying this topic, this group was already quite qualified to lead the conversations we need to be having with state and local fiscal leaders. The workshop was streamed live, so there are likely many more out there who are ready to go. In fact, the workshop trended on Twitter due to the robust conversations that were inspired by the presenters and activities.

Here are my key takeaways from the workshop, for anyone interested in influencing tax policy to advance population health:

One of the workshop presenters noted that enacting tax policy is a balancing act among competing interests. Many sectors are already out there making sure their interests are being represented. Those of us working on health system transformation also need to gain a seat at this important table in order to shape incentives and create new funding streams. We need to learn the basic language, shine a light on how tax policy is relevant to our work, and identify partners (including state policymakers) who can help us enact new approaches. Hopefully, the resources we have presented in this blog series will help you begin this critical process.

Keep thinking with us! Please watch the NASEM conference videos here and invite us into your conversation about tax policy and health system transformation. We also invite you to leave a comment below about how you imagine we could use tax credits as a source of sustainable financing for population health.