In last week’s post, the first in a series on crafting a comprehensive strategy, I wrote about the Marshall Plan, perhaps the most famous comprehensive strategy in U.S. history. It helped Europeans not only recover, but also emerge even stronger from the wreckage of World War II. George Marshall, the plan’s architect, understood that an array of narrowly divided and disconnected strategies would never unlock the full potential for European prosperity and interdependence. Instead, he reasoned that a single comprehensive strategy for development across Western Europe was best suited to harness the region’s potential and trigger a true, transformational renaissance.

Those of us seeking to address other persistent challenges—even on a smaller scale than the post-war reconstruction of Europe—can benefit from this way of thinking. Case in point, over the past two years, my colleagues and I at ReThink Health have been working with six communities committed to transforming health and well-being in their regions. Our initiative, ReThink Health Ventures, is being driven in each region by savvy groups of organizational leaders and residents who are coming together to define the shared values and a comprehensive strategy that will steer their regional health systems in new directions. They are doing the hard work of stewardship, establishing the conditions to work together across traditional boundaries to more successfully and creatively lead health system redesign. This blog shares just one of their stories.

Toward a Comprehensive Strategy in King County, Washington

Two years ago, a few stewards in the region gathered to shape an emerging Medicaid reform effort. They were charged by the state health authority with launching a new accountable community for health (ACH) in King County as part of a statewide effort to transform health care services through a Medicaid waiver approved by the U.S. Centers for Medicare & Medicaid Services. Planning for an ACH in King County prompted a few major organizations to deliver higher value health care in ways that they had never done before, and they had many questions about how best to design their ACH for the long haul. What exact form would it take? What would sustain its long-term future? Where would be its proper place within the overall organizational landscape of the region?

Efforts to answer these questions caused leaders to look beyond the immediate importance of the ACH’s focus on Medicaid reform. The more they talked about their higher values and visions for the region, the more they realized that, above all, they were concerned about a more macroscopic problem—one that affects not only the future of Medicaid, but every other sector as well.

King County is a beacon for population growth because of its economic vitality, natural beauty, and progressive values. But, despite its many benefits, growth also comes with its own challenges. In particular, King County’s growth is putting enormous pressure on housing affordability, limiting regional mobility and intensifying economic inequity, all of which, in turn, harm people’s health and drive the demand for costly urgent services. Many initiatives over many years have been designed to address particular challenges (such as homelessness, transportation, healthy food and fitness, justice reform, community revitalization, and early childhood development).

These focused endeavors are both important and impressive unto themselves, but even their leaders acknowledge that a much stronger response is needed to counter the intertwined threats that jeopardize health and well-being across King County. Indeed, more and more leaders have become convinced that they must act together, as part of a wider endeavor, to be better stewards of the place they love and of a way of life that they see moving farther and farther out of reach.

This has proven to be a galvanizing realization, one that has allowed a more comprehensive regional strategy to begin to emerge around equitable health and well-being. Over the past two years, through honest dialogues and open public narratives with fellow residents and organizational officials, the network of institutions, organizations, and partnerships willing to work together to create a comprehensive strategy has continued to expand.

Pulling Pieces Together into a Portfolio

At multiple points along the way, this growing network has had to figure out how its activities fit into a larger story about King County’s future. Last year, for instance, leaders from more than 35 major initiatives got together to use ReThink Health’s Negotiating a Well-Being Portfolio Exercise to explore how they could create a more balanced portfolio for equitable health and well-being. The exercise helped leaders appreciate that, when taken together, their many strong, well-established initiatives already address many priorities for a comprehensive regional strategy. For example, they affirmed the importance of the following endeavors (and dozens more): 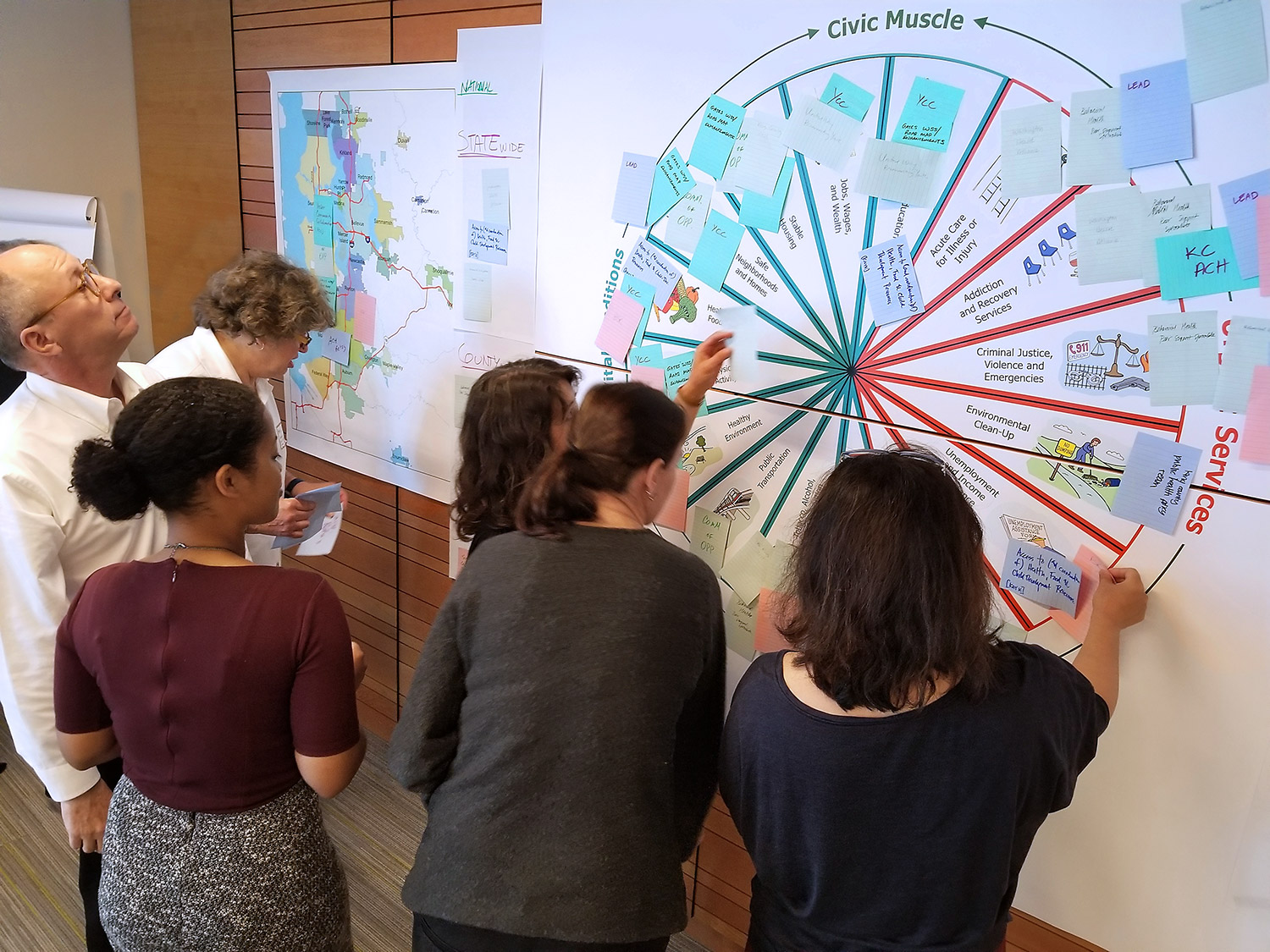 The next step was to look at how these initiatives work—specifically what they do and with whom—and what might be missing. When they took this step, system stewards saw two opportunities to make their emerging strategy even more transformative. First, they realized that initiatives that touch the same people and places could do much more to position residents at the center of their thinking; they could also more effectively work together to harness combined benefits. This inspired the network of leaders to see themselves not only as experts in their particular domains, but also as multisolvers seeking single solutions to multiple problems.

Second, they discovered that none of the existing initiatives were doing enough to build belonging and civic muscle (i.e., special capacities of people and institutions that convey to all a sense of belonging and power to influence the policies, practices, and programs that shape our world). Participants understood that belonging and civic muscle have the potential to counter the harms of loneliness and social isolation and are immediately health-enhancing unto themselves. They also acknowledged that stronger social ties and the power that comes from working together are necessary for many practical purposes, such as facilitating agreement on new policies, approval of new kinds of financing, or fulfillment of the county’s legal and moral obligations to promote equity and social justice.

On the strength of this strategic analysis, this group of leaders quickly agreed that it was a pressing priority to cultivate a stronger sense of belonging and civic muscle across King County. Within a few months—thanks in part to resources contributed from the Bill & Melinda Gates Foundation, which had been involved early on—the group launched a novel venture called “You Belong Here,” which is now operated through the Seattle Foundation as part its newly launched effort to strengthen the Civic Commons.

You Belong Here both complements and connects other parts of King County’s emerging regional strategy. It is unlike a typical program or a narrowly focused partnership, but instead is a conscious effort to establish new norms that strengthen connections among leaders from government, philanthropy, large and small businesses, other institutions, and residents and community leaders. You Belong Here challenges leaders across King County to embrace a “new leadership ethos” for decision-making that recognizes more people as meaningful members of the community and active contributors to their common lives. This unifying commitment to strengthen belonging and civic muscle could well be the glue that holds together a truly inclusive, comprehensive strategy for equitable health and well-being in the region.

All of this work has helped to put King County on a different course by combining the many pieces of its impressive portfolio into a powerful force for equitable health and well-being. You Belong Here has been embraced as an official governing philosophy of the King County Executive. Leaders in many more sectors now appreciate the critical importance of major, long-term investments in initiatives like Best Starts for Kids, Communities of Opportunity, and SoundTransit 3. And the Accountable Community for Health, which had initially engaged health experts for the purpose of redesigning Medicaid delivery, has since taken on a new public face as one among many places where residents and health professionals can work together to cultivate a deeper sense of belonging and care for each other. Accordingly, the ACH was renamed HealthierHere to better express a more present and personal way of working together.

The next post in this series will provide more details on the key components of a comprehensive regional strategy—the next steps that stewards of places like King County can take to progress toward their goals. Let us know how your transformation journey is going by commenting below or emailing us at [email protected].