What Would it Mean for Hospital Leaders to be Stewards of Their Regions’ Well-being?

Over the next several weeks, The ReThinkers’ Blog is introducing ReThink Health’s three projects in which we are working with national and regional stewards as they discover what it takes to drive transformative change and produce better health and well-being for all. Today, Pedja Stojicic describes our work with hospital leaders who are investigating how to best become “stewards” of their own regions.

Hospitals are under a lot of pressure. They are facing what we call a problem of “balancing two boats” at the same time, while the stream is moving really fast. For example, hospitals are transitioning from fee-for-service to value-based payments. And they are moving from a provider-centered mindset to patient-centered mindset. These are big transitions, and they bring up a lot of questions about how to handle the tension between where we are now, and where we’re going.

What’s producing all of this tension? Well, hospitals often feel caught between the business models that keep them afloat and the realities of what we understand about what produces health—what keeps the people living in their regions afloat.

Hospital systems are forming their own interpretations about how to respond to these pressures. But we believe there’s an emerging, all important, question that is being overlooked in these interpretations; and it’s a question that needs to be answered first. That is, what role should hospitals play in their regions? If the answer to that question turns out to be something different than the role hospitals currently play, then there are more questions. For example, what new business models, work cultures, and responsibilities will be needed for any new role?

Without clear roadmaps and endpoints, many hospital leaders are understandably reluctant to begin a journey like this. Yet, some are finding the courage to take the lead. These leaders among leaders are stepping up and finding a way to determine the desired endpoints so they can construct the roadmaps themselves. ReThink Health’s Hospital Systems in Transition project team is identifying a handful of them as project partners who are ready to stand at the forefront of this challenge and begin to pave the way forward.

Looking back to see forward

In a quick look into the history of hospitals, we found that US hospitals have transformed themselves at least four times in the eyes of the people they serve. They’ve gone from being perceived as almshouses and “Houses of Death” in the 1700s, when they were mostly funded as charities, to the “Homes of Science and Knowledge” a hundred years later when nursing and surgery came to the forefront. After the Great Depression, there was a period of substantial regional and national investment in “Our Community’s Hospitals.” Then in the 1970s and 80s a new perception came about. Hospitals started being associated with “Big Business,” an idea that has continued until present day.

We see, however, that hospitals are on the precipice of another big shift in this new era of population health. Today, the big questions are:

At ReThink Health, based on a decade of high-profile work identifying how stewards can equitably transform health and well-being in their regions, we believe hospital leaders will want to be seen as stewards. Stewards are people and organizations who take responsibility for working with others to drive transformative change in regions—in this case, they’re pursuing the health and well-being of all people. ReThink Health’s best hypothesis is that active stewardship among key players in a region is the only effective path to population health.

Professionals from many sectors are already beginning to take on this role, partnering with others to transform health and well-being—hospital leaders included. For example:

Early innovations like these are beginning to shape what it would mean for a hospital to embrace its role as a regional steward. But without a clear way to engage both internal and external stakeholders and understand their perspectives and constraints, these innovations could be either short-lived, anemic, or even contribute to the existing health inequities. 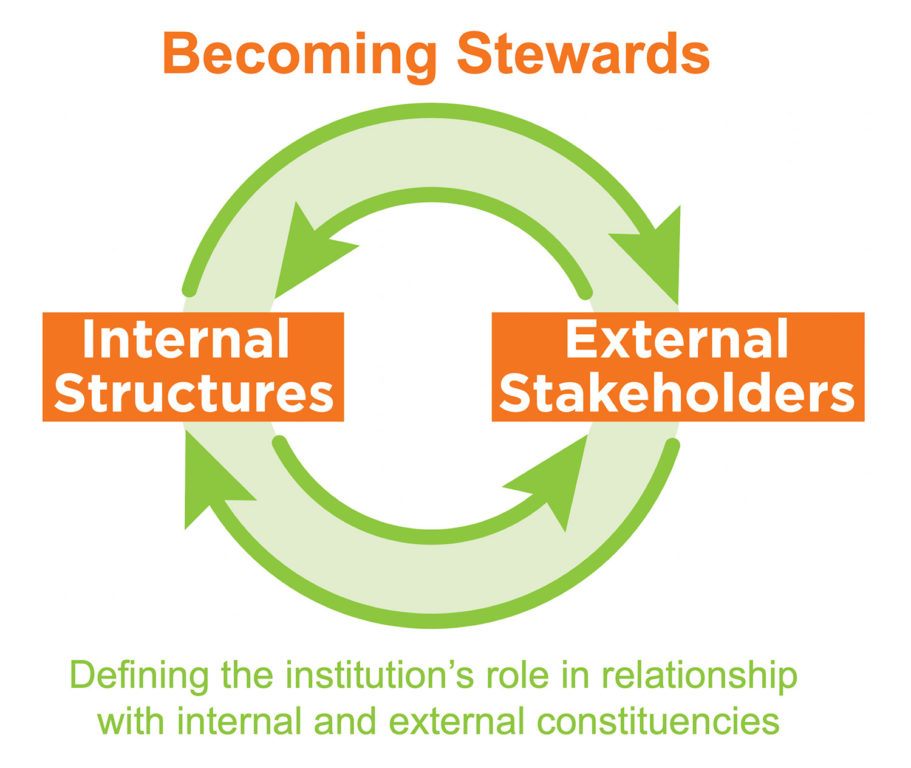 To that end, ReThink Health is partnering with three pioneering hospital systems in which leaders are ready to embark on the journey of Becoming Stewards and explore and define their role in creating their region’s health and well-being. They include:

We are working together with these partners, and in relationship with these hospitals’ internal and external constituencies, to determine any new role and what it might take to transition to that role, including the possibility of:

With these new relationships and understandings, hospital leaders will be able to determine what it means for their own hospital system to become a steward working in collaboration and alignment with other people and organizations in their region to create lasting change. What we find will serve as a guidance for pioneering hospital leaders in other regions, who can build on the early lessons of what’s involved in shaping and transitioning to a new regional role.

My team invites you to explore our project web page and follow us on social media to learn more about this work. You’ll find a set of videos digging deeper into our most pressing questions, and some relevant things to read. We also welcome any ideas and insights: [email protected] On social media, #ThinkWithUs