Over the past several weeks, we have been exploring the basics of a comprehensive regional transformation strategy. As our blog series on strategy continues, we consider below the importance of prototyping, or testing and refining new approaches (such as the interventions in your portfolio), before making wholesale system changes. The idea is to shift your mindset away from assuming that simply deciding on a portfolio of interventions is enough. Adopting a learner’s mentality helps you refine your portfolio over time to ensure greater success. This blog doesn’t specifically mention the “portfolio” concept, so we wanted to make this connection for those of you who have been following the series.

It’s fair to say that the kinds of health challenges we face today are manifestly different from those faced by previous generations. When our grandparents became ill, the cause was most likely infection or injury. The kinds of health care interventions that saved them were narrowly focused on restoring their physical health and were probably delivered in a hospital setting. If they were successfully treated, they returned home in a state similar to when they left. In that era, our medicine was less sophisticated, but then so were our problems.

Today, the very nature of illness has changed—the conditions that make us sick are no longer of a strictly medical nature. Instead, our illnesses have multiple determinants, and the potential solutions are complex. Diabetes, hypertension, and obesity have risen because of sedentary lifestyles, poor quality food, greater stress, and many other factors that are exacerbated by social and economic disparities. Loneliness, depression, and suicide require a very different integrated toolset to address their myriad causes, more than traditional medicine has ever had to employ.

Addressing our contemporary disease burden requires a complex combination of interventions that no individual organization offers. Medical care might be provided by a physician in a clinic, but medication assistance might happen at the local drugstore. Social assistance (e.g., housing, food, welfare) might come from a government agency, but additional resources (e.g., childcare, job training, legal assistance) might be delivered by a local community-based organization. Informal support will likely come from friends and family. In aggregate, all these health and social services represent a systemic effort, which is necessary in order to have real effect. And therein lies the primary challenge—systems consist of multiple entities, which are often uncoordinated, misaligned, or unaware of each other’s priorities. Getting a “perfect” system response is unrealistic because systems are, by nature, non-deterministic; we cannot prescribe a set of inputs and expect a perfectly coordinated response in return, so we must approach the problem differently.

As we face greater, more complex challenges in health care, we have to shift away from prescriptive approaches and move toward a learning mentality. New problems require new approaches, and we need new methods to develop and test new systemic solutions. All systems, including health systems, have a variety of inputs—societal needs; funding streams; people and the roles they play, including clients and staff; technologies; etc. Systems also have outputs, which can be thought of as outcomes or results. The relationships between the inputs and outputs are governed by laws, rules, and policies, but, most importantly, they are driven by the individual motivations of the stakeholders trying to bring about change. The only way to ascertain how a system will respond to a new set of inputs is to provoke a response, and then revise and refine based on the observed result. This is called system prototyping. 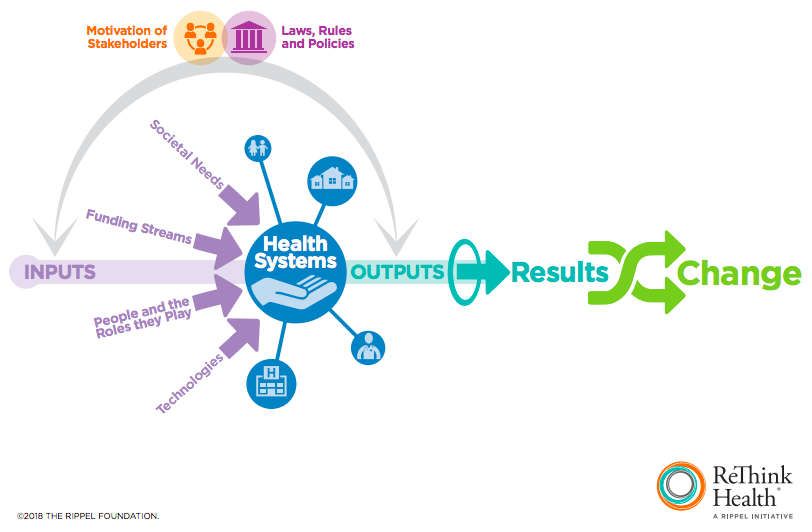 Prototypes are essentially models used to test the viability of a new offering. They can be models of physical products, digital interactions, service offerings, or even communications. Importantly, prototypes rarely represent the complete final offering. They are built to answer questions about a component of the final offering that is unresolved, and the feedback that they generate from customers helps to define that final offering. Prototyping is one of the critical tools of designers, no matter what they design. Designers believe that prototypes, done well, get to a more compelling final offering more quickly through savvy, iterative testing.

System prototyping, then, emerges from the intersection of systems theory and design, where prototypes test the dynamic responses of systems, allowing outputs to be tuned by tweaking the inputs. It’s essential here to note an important distinction—the difference between a prototype and a pilot. Pilots, especially in health care, are large, market-facing deployments that are meant to prove a hypothesis. Prototypes, on the other hand, are not meant to be market-facing—they are tested with safe, but critical, audiences who can help reveal challenges and problems before they are discovered in deployment.

System designers believe that you can create new systemic behaviors by applying a considered set of inputs, studying how the system responds, and then revising the inputs until the system produces the desired outcome. This is one of the central tenets of our work at the Design Institute for Health.Launched in 2015 at The University of Texas at Austin, the Institute was created to apply design to the nation’s health care challenges––and we’ve had the chance to put this theory to work.

A More Patient-Centered Approach in Austin

Here in Central Texas, we find ourselves with a shot at real health care system change. Six years ago, Travis County taxpayers voted to raise their property taxes, generating more than $100M annually in new funding to provide health care for residents who couldn’t previously afford it. Today, the county health care district is keen to fund more effective ways to get and keep people healthy, and is focused on value-based models of care, which means the system is paid when providers generate better outcomes—a departure from the traditional fee-for-service model. In pursuit of this, we’ve had to develop a system prototyping approach in order to get to the kinds of broad, multi-stakeholder solutions that are most effective at achieving those goals.

We begin by mapping the stakeholders in the system and identifying what they exchange with each other (e.g., product, service, regulation, information, money). Each stakeholder has individual priorities—what they are trying to achieve or optimize. When you try to shift the system from its current state, it is important to understand where those shifts result in a misalignment of priorities between stakeholders. We call these “collisions,” and they become the focal point for system prototypes.

As an example, in Austin, we recently launched new specialty clinics at the Dell Medical School, where  we explored the elimination of waiting rooms as part of an effort to improve overall patient experience. To be clear, no one wanted waiting rooms: patients don’t like them and doctors aren’t attached to them. But eliminating waiting rooms caused an unexpected collision: the medical providers voiced concerns about ensuring a steady flow of patients into the clinic. Their traditional financial model requires that they see patients without interruption, and queueing up patients in nearby waiting rooms has been the traditional response to that pressure.

In a system prototype, once collisions are identified, a closer inspection of each stakeholder’s priorities is necessary to understand the misalignment and where there may be opportunity for redesign. In the case of the waiting rooms, it was clear that the providers weren’t opposed to a better patient experience, but they felt pressure to be constantly productive. Any potential solution to the elimination of waiting rooms would have to take that into account. On the other hand, doctors were open to redesigning their own workflows to create a better experience for the patient.

Because it’s difficult to know how the system will respond to any solution, it is useful to develop multiple approaches that can be tested. This allows us to gather more data so we can better understand the behavior of the system. In any system transformation effort, there are usually multiple collisions. Knowing which of these pose the greatest challenge to progress helps to focus effort and energy.

In our effort to eliminate waiting rooms, we tried a number of approaches, checking each against the priorities of the various stakeholders involved. Our eventual solution was to ask the providers to give up control of their exam rooms. In our clinics, patients stay in the same exam room regardless of how many providers they are seeing on a particular visit. This means that we can guide patients directly to their own exam rooms when they arrive, and providers move from room to room when they are ready to engage the next patient, instead of occupying a room themselves and requiring perfectly timed delivery of patients. This solution, which takes into account the preferences of patients and the needs of providers, has allowed us to eliminate waiting rooms altogether. You can learn more about the patient-centered environment at these clinics on our website.

It’s clear that building system solutions is no easy task. Any initial prototype faces challenges. Will it succeed at scale? Will success in one set of circumstances transfer to another? How do you measure success before you get to scale? To mitigate these risks, it’s necessary to identify interstitial metrics—indicators that, while imperfect, are easy and quick to measure and correlate with and predict full-scale system success. For the waiting rooms, one of the things we measure is how much unproductive time physicians have between different patients as a way of determining a productivity outcome of the system.

The American public health and health care systems are colossal ocean liners that move reluctantly and tend to work best within the confines of their legacies—they are very much loathe to change. In recognizing that we cannot accurately predict the success of our broad-based, multi-stakeholder efforts, we have to embrace a new kind of humility that invites more trials, even if it results in occasional errors. Developing a learning mindset that embraces prototyping will benefit all of us as we channel the limited resources we have toward the broad system change we all aspire to and know is necessary.

Over the past four weeks, The ReThinkers’ Blog has been exploring why it’s important to develop a theory of system change and portfolio of interventions if you want to transform the health of a region. Prototyping is one way of testing how your theory and portfolio will play out before making wholesale changes. Prototyping would allow you and your partners to see the ripple effects of even small tweaks you may want to make to the system—to test the desired interactions and interconnections within and among the system as a whole and then see what impact each change might make.

We welcome your thoughts about prototyping and its contributions to creating an effective strategy for system change. Comment below or send your thoughts to [email protected].